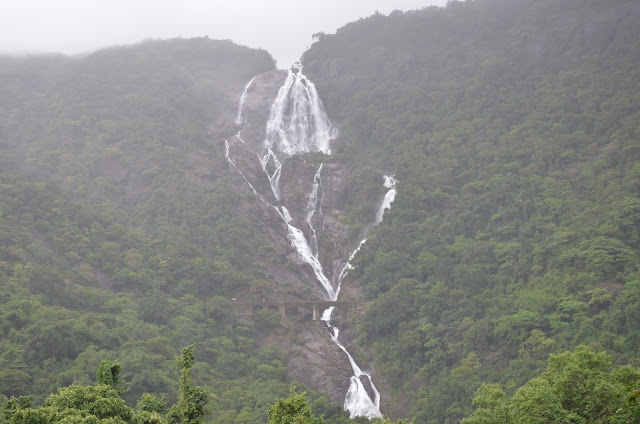 Usually the trips we plan gets finalized at the last moment - making all the bookings a day or two before. But, For this trip we just changed the usual way. This was a well-planned one. We had booked train tickets and stay almost a month in advance.

We boarded the train from Bangalore City station. We had our reservation in Rani Chennamma Express till Londa Junction. We reached Londa Junction at around 8:30 AM. We had breakfast at the station - Vada Pav and Idli Vada - were only things available there. Then, we bought General tickets and boarded Chennai Vasco Express at around 9:00 AM. We reached Castle Rock at around 10:00 AM.

We started our expedition From Castle Rock at around 10:30 AM. Weather was awesome - drizzling with cool breeze. View was awesome all the way - full of Jungles, Mountains, small and big waterfalls. The rail trek was an ultimate experience amidst the beautiful Western Ghats.


The rail trek is full of stones from the start till the end, So my suggestion would be to wear a good trekking shoe if you are going for this trek. We reached Dudhsagar Waterfalls at around 4:00 PM. It's about 14 KM from Castle Rock to Dudhsagar, but you will never feel tired if the weather is good and It was good for us. After reaching to the waterfall you have to trek around a kilometre to reach the view-point.

We continued our trek even after the view-point instead of returning to Dudhsagar. We trekked till the Sonaulim Station and then boarded another train and reached Kulem. That's another interesting story how we boarded the train in Sonaulim. We had booking in Dudhsagar Spa Resort which is around 6 KM from Kulem. Then, we booked a cab from Kulem Station and reached there.

It's a nice place to stay. We stayed in tents. Tents were good & well maintained. Food was good, they had a dancing floor as well along with the bar/restaurant. Overall our stay was good at the resort. Resort has Spa and other activities as well but, with extra charges. We didn't had much time to check them out.

Next Day, we went to Tambdi Surla Mahadev Temple, which is around 20 KMs from the Dudhsagar Spa Resort. We returned Bangalore in the same train which we boarded from Londa Junction at 8:00 PM.

We all enjoyed the trip and the rail trek was an awesome experience. Checkout some more pics on Tripoto.

Popular posts from this blog

December 07, 2012
I had heard about blogs few years back. Since then I wanted to write my blog. But, for some reasons like, what to write, how to write etc, always stopped me. Finalizing an address for the blog is most depressing thing. Address of your choice will be unavailable and to think of a name, which would be available will take a lot of time. " Sorry, this blog address is not available " will vanish your enthusiasm/excitement for blogging, unless you come up with a really unique and out-of-box kind of word/words. BTW, my blog name is not so out-of-box, but it's in Hindi (my mother-toung). This blog-name thing is one of the significant reason, I am coming up with my blog a bit late. Logged in to blogger so many times earlier, but I was not getting a name which I like. But, this time I was determined to start my blog and So friends, this is the start of  "meri-jigyasa.blogspot.com". Edit: Now, I have a custom domain "www.merijigyasa.com" for my blog. Thank
4 comments
Read more

September 27, 2015
The breathtaking images of picturesque railway route from Sakleshpur to Kukke Subramanya captivated us to go for this trek. We had been planning to do "The Green Route trek" - that's what it is called, from last few months and then finally the day has come and we started for our journey to Sakleshpur - also referred as "Poor Man's Ooty". We read some news about the ban on trekking in western ghats. But we were not sure if it is really banned. Before the conversion of the railway line from meter gauge to broad gauge along the Sakleshpur railway line in Karnataka’s Hassan district, it was one of the most sought-after trek routes. 1, 2, 3 - Smile 1, 2, 3 - Smile We started our journey from Bangalore on Friday evening, had dinner enroute in a dhaba near Hassan and reached Sakleshpur at around the Midnight, Checked into Hotel. Next morning, We talked to some local people and We came to know "The Green Route" Trek is banned for sure. Bu
2 comments
Read more